Research 145: Development of a pulsed light approach as a novel solution in drinking water treatment

Summary: The aim of this study was to determine if a novel PUV system provides a suitable means of disinfecting water, with particular emphasis on parasite species. 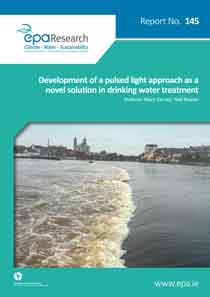 The presence of parasitic species such as Cryptosporidium and Giardia in water supplies has been well documented – and in some cases before and after
the disinfection processes have been implemented in water-treatment plants. The resistance of these species to chemical disinfection, such as chlorination, aids their viability and infection potential in the environment.

Research is focusing on using alternative methods to remove these organisms from water supplies. Such methods include the use of ultraviolet (UV) light at certain wavelengths. UV treatment has proven effective at causing cell death in numerous microbial species. However, it does have its limitations, such as depthof- water penetration, presence of contaminants and the repair mechanisms organisms possess to fix UV damage. New methods of delivering UV light to the treatment area – such as pulsed UV (PUV) – have been developed which may eliminate these issues.

Consequently, the aim of this study was to determine if a novel PUV system provides a suitable means of disinfecting water, with particular emphasis on parasite
species. In order to achieve this goal a variety of techniques were used, including the identification of a suitable means of determining parasite viability in vitro using human-derived cell lines.

Therefore, this project reports on the use of an in vitro cell culture-based polymerase chain reaction (PCR) method for the determination of inactivation rates of the pathogenic parasites Cryptosporidium parvum and Giardia lamblia using a novel PUV system.

Results from this study show that the human-derived HCT-8 cell line was more suitable for supporting parasite infection and PCR amplification and was used for all viability studies. Findings described in this report highlight the effectiveness of this light system in activating a broad range of microbial test species and parasitic organisms.

Findings described show that this light system can be adapted for use as a flowthrough system disinfecting water flowing at varying flow rates. Moreover, these studies have identified a non-pathogenic harmless Bacillus endospore (Bacillus megaterium) which may be used as a surrogate for Cryptosporidium inactivation studies as it shows similar inactivation rates to that of the problematic parasite.

The use of such a surrogate will allow for more indepth studies on the removal of C. parvum from water supplies without causing contamination issues. It is worth noting that G. lamblia proved more UV resistant than C. parvum. An extensive range of ecotoxicological studies showed that no harmful effects were caused to the treatment liquid following UV exposure.

The system is therefore deemed safe to use on water that is to be released into the natural environment. It was also found that the PUV light system provided a more rapid and cost-effective means of inactivating test species than the standard UV lamp system currently in use. A significant increase in microbial and parasite death was achieved within a much shorter treatment time using the PUV system. Inactivation of test species using a flow-through PUV system was achieved for all flow rates and retention times assessed.

Indeed, Bacillus megaterium vegetative and endospore cells were repeatedly inactivated, highlighting its potential for the removal of Cryptosporidium parvum.

Therefore, the findings of this research project conclude that the PUV system may successfully be adapted for use in water-treatment plants if used as a system with two or more lamps adjacent to each other and using operational parameters that have proven effective at bench scale.