Summary: The five-volume report (plus a Summary document) gives an account of the investigations into animal health problems in the Askeaton area of Co. Limerick, carried out in the period 1995—1998. The volumes are as follows: Main Report (and Summary); Animal Health; Soil, Herbage, Feed & Water; Human Health; Environmental Quality. 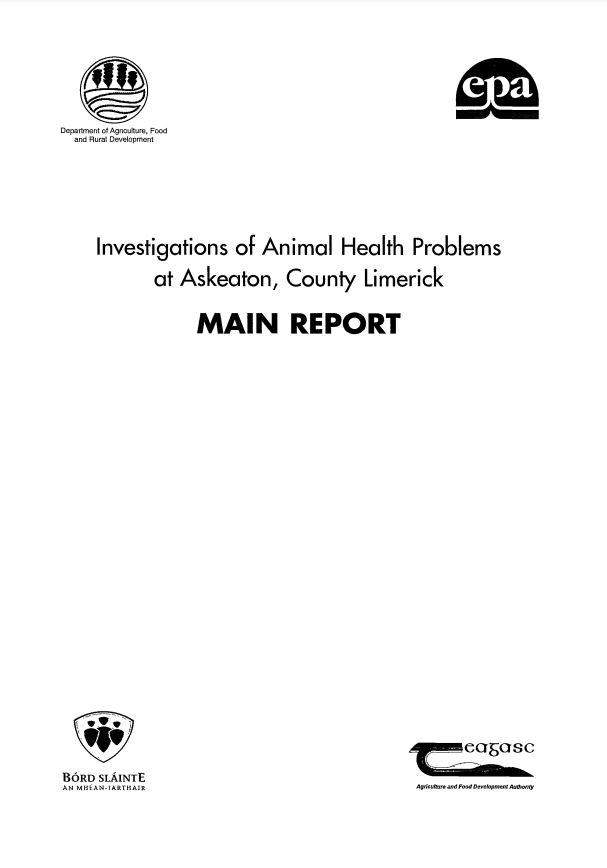 The five-volume report on the investigations of animal health problems in the Askeaton area of Co. Limerick, carried out in the period 1995 —1998.

The five volumes are as follows:

The investigations were prompted by reports of severe animal health problems on two farms in the Askeaton area, which first came to notice in the early 1990s. In February 1995, following preliminary investigations by Limerick County Council, the Environmental Protection Agency was requested by the Minister of State at the Department of Agriculture, Food and Rural Development to coordinate a wider study of the situation. This was considered necessary, as there were local concerns that human health was also being affected in the area and that environmental pollution was involved.

Arrangements for the undertaking of the investigative work were put in place in late February 1995, this being assigned to the Veterinary Research Laboratory of the Department of Agriculture, Food and Rural Development (animal health), Teagasc (soils, herbage, and related aspects), the Mid Western Health Board (human health) and the Environmental Protection Agency (environmental quality aspects). Subsidiary studies were carried out by Coillte and the Mid Western Health Board, respectively, on tree health and the levels of metals and other substances in vegetable production.

Field measurements and observations took place between March 1995 and December 1998. Interim reports were published in December 1995, June 1997, and August 1998.