The Quality of Bathing Water in Ireland 2011

This report presents findings and results for 2011 on the quality of Ireland's identified bathing waters.

Summary: The monitoring of water quality at 135 identified bathing waters in 2011 was governed by the new Bathing Water Quality Regulations 2008 (S.I 79 of 2008) which transposed the new EU Directive on bathing water (2006/7/EC). The 2006 Directive gives stronger focus on the protection of public health, a proactive approach to the management of bathing water quality and greater public participation. 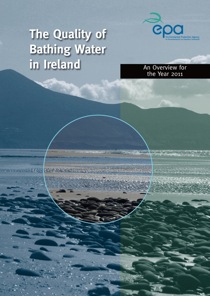 The legislation governing the quality of bathing waters for the 2011 season is set out in the new Bathing Water Quality Regulations 2008 (SI No. 79 of 2008) which transposed the new EU Directive on bathing water (2006/7/EC) that came into force on 24 March 2006. Transitional measures are in place until the 2008 Regulations are fully implemented in 2015.

Overall, while the vast majority of Ireland’s identified bathing waters meet the current minimum standards, the stricter criteria set out in the 2006 Directive (2006/7/EC) will require local authorities to make even greater efforts to improve the water quality and to tackle potential sources of pollution.

More information can be found on the EPA Splash website (www.bathingwater.ie).