Determining Historic and Current PFAS Levels in AFFF in the Republic of Ireland.

Summary: A desktop study and survey of users of PFAS-containing fire-fighting foams highlighting the potential risks to human health and the environment via their disposal and use. 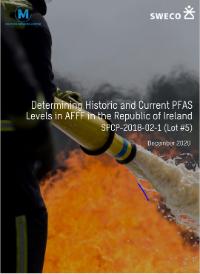 Per- and poly-fluoroalkylated substances (PFAS) are a large group of man-made chemicals that have been used in industrial and consumer products since the 1950s. Due to their water and oil resistance, chemical and heat stability, friction reduction and surfactant properties, they can be found in many everyday products, including fire-fighting foam. PFAS can have harmful effects on human and animal health and accumulate and stay in the environment and in our bodies for long periods of time.
Two PFAS are regulated under the Stockholm Convention on Persistent Organic Pollutants (POPs) and the EU POPs Regulation - PFOS (perfluorooctanesulfonic acid) and its derivatives and PFOA (perfluorooctanoic acid), its salts and related compounds. Other PFAS are being evaluated for likely restriction under REACH and the European Chemicals Agency (ECHA) is proposing a ban on the use of all PFAS in fire-fighting foams. The EPA commissioned a study to investigate the extent of use of PFAS-containing foams within the State. A survey was sent to 200 potential users, namely public sector organisations (including Local Authority Fire Services), utilities, marine operators, the aviation sector and installations operating under an EPA licence. The survey sought information on historic and current amounts of PFAS-containing foams used and in stock and information on foam brands, suppliers, incidents where foam was used and any containment measures employed to curtail the spread of used foam.
There was a 38.5% survey response rate (77/200), with the majority from EPA-licenced sites, with a limited number from Fire Services. A large variety of foams were reported with 83% (60/72) containing/possibly containing PFAS. Significant knowledge gaps were identified among respondents regarding PFAS restrictions and in determining the PFAS content of foams. An estimated total of 1.1 million litres of PFAS-containing foams are currently in stock with the majority being held at EPA-licensed sites and mainly in automated fire suppression systems in fuel terminals and pharmaceutical facilities. The disposal routes of used PFAS-containing foams at these sites was identified as a potential risk, with many being disposed of via waste water treatments plants that are inadequate at removing PFAS. Approximately 18,000 litres of PFAS foams were identified as being held by Fire Services that responded to the survey and the uncontained release of these foams during training and incidents was highlighted as a significant risk.
This report has highlighted the wide-range, and in many instances, large volumes of PFAS-containing foams used by industry and Fire Services and the knowledge gaps that exist. Further work is underway to assess the risks posed by the release and disposal of PFAS-containing foams and to develop guidance on their proper management and disposal.