PCB's in Open Applications in Ireland

Summary: Polychlorinated biphenyls (PCBs) are a group of chemicals mainly produced during the 1900s, with potentially serious health and environmental effects. 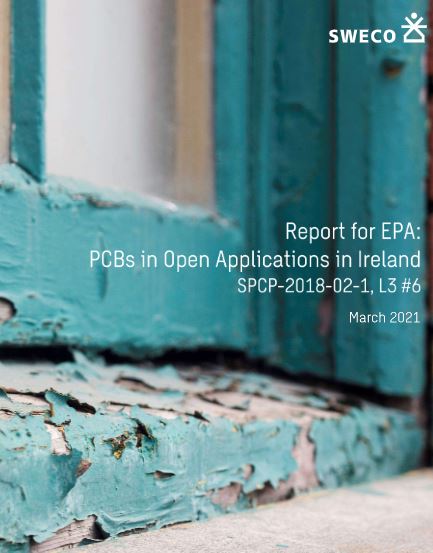 PCB production peaked in the 1960s/70s but stopped in many countries in the 1980s following a ban on the use of PCBs as a raw material or chemical intermediate in 1985. PCBs are Persistent Organic Pollutants (POPs), which persist in the environment and are toxic to humans and wildlife. Ireland is party to the global Stockholm Convention on POPs, which aims to protect human life and the environment from POPs, including PCBs. Efforts to control the release of PCBs to the environment have primarily focused on their use within equipment such as transformers and capacitors. The use of PCBs in open applications, such as in paints and sealants, is less well documented and controlled. This report was prepared by Sweco to document the findings of a desktop study, completed on behalf of the Environmental Protection Agency (EPA), on the potential historic uses of PCBs in open applications in Ireland.

A list of PCB-containing products was prepared using data from other European countries, as well as information on PCB congener profiles, technical blends, brands and periods of use. Consultation was carried out with Irish industry representatives as well as Swedish industry professionals experienced in the management of PCBs in open applications and a Swedish laboratory active in PCB analysis of building materials and environmental samples. Approaches adopted in other countries for the management of PCBs in open applications were reviewed. Information on PCB quantities used in open applications for other European countries was evaluated to estimate the extent of usage of PCBs in the Irish building sector.

Consultations with Irish stakeholders revealed very little surviving knowledge of the use of PCBs here. Linking PCB congener profiles or technical blends to product types was found to be of very limited use for identifying PCB-containing products. Significant progress has been achieved in some countries through regulations on PCBs in building materials, screening of construction and demolition waste for PCBs based on year of construction or at the point of removal and a mandatory requirement to remove and dispose of PCB-containing materials ensuring environmentally sound waste management. The likely quantities of PCB in buildings in Ireland was estimated to be in the range of 28-297 tonnes.

In conclusion, the availability of information on the use of PCBs in open applications in Ireland is very limited. Recommendations which may help to increase awareness and support
for the future management and control of PCBs in open applications include a pilot programme of sampling and analysis for PCBs in buildings and the development of awareness/training programmes for the various stakeholders.