Celticflux: Measurement and modelling of Greenhouse gas fluxes from Grasslands and a Peatland in Ireland 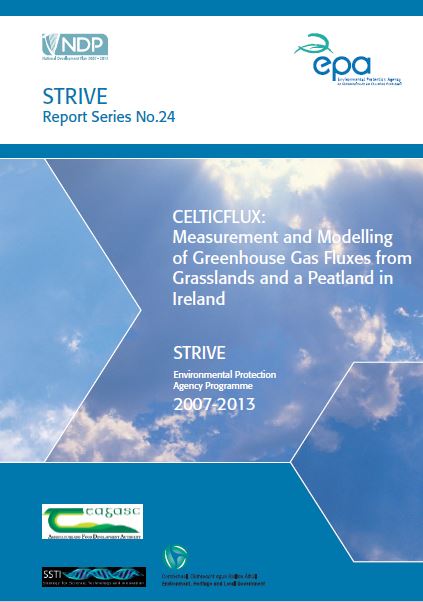 Because of the significance of grasslands to Irish land cover, the economy, GHG emissions, and ongoing land-use changes, the status of grasslands as a source or sink for GHGs needs to be quantified. Grasslands remove CO2 from the atmosphere via photosynthesis and emit CO2 to the atmosphere via respiration. When summed over the year, the net effect of photosynthesis and respiration may result in the grassland being either a source or sink for CO2. Emissions of N2O are a significant GHG (~298 times more potent than CO2 at the 100 year timescale) and are released into the atmosphere from grasslands after the application of nitrogen in fertilisers, animal excreta and manures. As for CH4, O’Mara et al. (2007) have reported on this GHG from ruminant animals. It is generally thought that relatively intact peatlands in Ireland are sinks for carbon. Few field measurements of GHGs have been made in Irish peatlands and so their ecosystem status as a sink or source for carbon has not yet been quantified. Because of their extent in Ireland, covering approximately 17% of the landscape, it is important to determine whether peatlands are a sink or source for GHGs.

To order a copy of this report: