Summary: There is strong and constant demand from various sectors for long-term, high-resolution gridded climate datasets. This report describes the available datasets and how, using a variety of available observational datasets, appropriate uncertainty estimates and skill scores have been calculated for the model outputs. 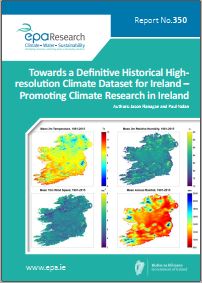 The European Union Strategy on Adaptation to Climate Change was published in 2013 with the aim of making Europe more climate resilient. The main objectives are to promote action, the “climate- roofing” of vulnerable sectors and better informed decision-making. This policy is reflected by the Environmental Protection Agency Research Strategy 2014–2020, which is built around three thematic pillars: climate, water and sustainability. The first of these “is framed by the vision of Ireland’s transition to a carbon-neutral, low emission and climate-resilient society and economy by 2050, and being a source of climate change information and solutions”. The Climate Action Plan (CAP) and National Adaptation Framework (NAF) set out the Irish government’s response to the issues of decarbonisation and climate resilience, respectively. An important strategy outlined by the CAP is that of “decarbonising electricity generation”, which will be facilitated by the Renewable Electricity Support Scheme (RESS). The NAF states that “uncertainties exist in relation to the extent and rate of future climate change” and that “adaptation actions must be risk based, informed by the vulnerabilities of exposed societies and systems and an understanding of projected climate change”.

The outputs from numerical weather models represent an alternative to observations for the production of gridded datasets, with regional reanalysis and/or dynamical downscaling often used to achieve high spatial and temporal resolution. Recently, the Irish Centre for High-End Computing (ICHEC) and (separately) Met Éireann have completed three long-term, high-resolution historical simulations of the Irish climate. This report describes the available datasets and how, using a variety of available observational datasets, appropriate uncertainty estimates and skill scores have been calculated for the model outputs. The validated, long-term, high-resolution (spatial and temporal) gridded datasets of climate variables and indices described here will be of use to researchers, planners and policymakers from various diverse sectors, including (but not limited to) climate science, renewable energy and agriculture.