Research 153: Identifying the Biological and Geographical Origins of Faecal Contamination

Summary: The aim of this project was to develop a tool box, Microbial Source Tracking (MST), to enable water quality managers to identify the biological and geographical sources of faecal pollution of water bodies. 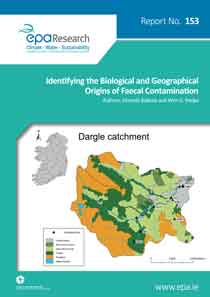 The aim of this project was to develop a tool box, Microbial Source Tracking (MST), to enable water quality managers to identify the biological and geographical sources of faecal pollution of water bodies.

This project made use of genetic markers that are specific for a bacterial species inhabiting the intestinal tract of a particular animal or human, and of markers that are specific for mitochondrial DNA of an animal, in order to identify the biological source of faeces and faecal water pollution. The detection method is based on the polymerase chain reaction (PCR), which was used in both a qualitative (end-point PCR) and a quantitative (qPCR) manner.

Initially, MST markers specific for human, ruminant, sheep, horse, pig and gull faeces were validated using end-point PCR with a panel of faecal samples obtained from humans and animals, as well as from raw and treated sewage.

This showed that the sensitivity of these MST markers was at least 73%, and the specificity was at least 87%. In addition, qPCR was used to determine the level of these markers per 100 mg of faeces, showing that the level of these markers was several orders of magnitude higher in the target species than in others.
Field testing of the MST markers was carried out in the Dargle catchment, which consists of agricultural, urban and pristine areas. Water samples taken at 12 sampling stations, as well as at the outfall of the Enniskerry wastewater treatment plant (WWTP), were analysed for the presence of faecal indicator bacteria and MST markers. MST analysis, using end-point PCR, showed a clear correlation between land use and the presence of MST markers. For example, the upstream areas of the Dargle and Glencree Rivers mainly contained the ruminant MST marker, whereas the Swan River, flowing through an urban area, mainly contained the human MST marker. Refinement of the analysis using qPCR identified three areas in the catchment that were mainly polluted by human faecal pollution: the
Dargle downstream of the outfall of the Enniskerry wastewater treatment plant, and the Kilmacanogue and Swan Rivers.

The use of MST as a forensic technique to identify both the biological and geographical source of pollution was demonstrated in the Swan River, which is almost exclusively polluted by human faeces. Water samples taken along the river, in between its source and its discharge in the Dargle, were analysed by qPCR, showing that the source of human faecal pollution is located in between the Wheatfield Estate and Hollybrook Park. Based on the average flow rate and on the levels of the human MST marker in the Swan River, the authors estimated that at least 48 kg of human faecal matter per day is discharged into the Dargle from the Swan River, accounting for 3% of all human faecal matter produced in the Swan catchment.