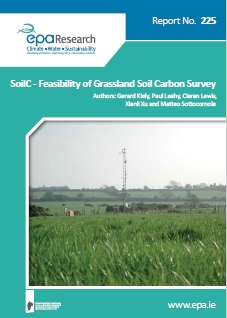 As of 2014, Irish agriculture contributed an estimated 33% of national GHG emissions compared to an EU average of 9%. With the implementation of the Irish Department of Agriculture’s Food Harvest 2020, the 2020 projection for Irish agricultural emissions is an increase of 9% (EPA, 2013). Land cover distribution statistics across Europe (EUROSTAT, 2012) estimate that Ireland has the largest proportion of land under grassland (67.1%) compared to an EU average grassland cover of 19.5%. Currently, there is no measurement, reporting and verification (MRV) strategy for carbon sequestration in Irish grassland soils. The lack of MRV and the high percentages of agriculture GHG emissions have resulted in calls within Ireland and Europe for Ireland to reduce its agricultural GHG emissions.

This project has built upon the Irish soil carbon database, a previous EPA research output, by modelling the current saturation level of carbon in Irish soils. As a result, the amount of additional carbon that can be sequestered in Irish soils has been estimated. The main finding is that of 36 sites representative of the full spectrum of land use in Ireland, 29 had a positive carbon deficit, indicating further potential for carbon sequestration. Further analysis of the results suggests that future policy initiatives aiming at increasing soil carbon sequestration should target grassland soils in particular, as these have the greatest carbon deficit.

Globally it has been shown that current and new grassland land management practices enable the sequestration of carbon in soils. It has been demonstrated that many management techniques intended to increase livestock forage production also have the potential to augment soil carbon stocks, including fertilization, irrigation, intensive grazing, rapid incorporation of manure and the sowing of favourable forage grasses and legumes. However, the measurement, reporting and verification (MRV) of carbon sequestration through field and research methods in Ireland is limited. For Ireland to benefit from IPCC greenhouse gas accounting methods, a national research effort is urgently required so that Ireland can produce evidence-based Measurement, Reporting and Verification (MRV) of carbon sequestration in its grassland soils.