Summary: The research described herein sets out to develop polymer-coated, membrane-based technologies that could be used to detect organic contaminants, nitrates or heavy metals, namely chromium and copper, in aqueous systems. The membranes were modified so as to investigate their potential in the required sensing capacity. 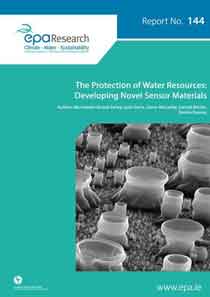 One of the more pressing challenges in the 21st Century is the provision of an adequate clean water supply that is free from pollutants and suitable for a diversity of uses. Although the quality of water in Ireland is generally good, the protection of water resources in Ireland is becoming increasingly important and will be a major challenge in the next few years and into the future, as an ever-increasing population will need a continuous supply of clean drinking water. The protection of the quality of water resources and the sustainability of these resources are key environmental goals in the Environmental Protection Agency 2020 Vision (EPA, 2000) strategy document, and are also in line with the Flagship initiative of the Europe Union Commission (European Commission, 2011) strategy for a resource-efficient Europe. The research described herein sets out to develop polymer-coated, membrane-based technologies that could be used to detect organic contaminants, nitrates or heavy metals, namely chromium and copper, in aqueous systems. The membranes were modified so as to investigate their potential in the required sensing capacity.
In recent years, there has been considerable concern about the level of nitrate in water. This is highlighted by the Nitrates Directive (1991/676/EEC), the EU Water Framework Directive (2000/60/EC) and related legislation.
The novel electrochemical deposition of poly[N-(2-cyanoethyl)pyrrole] (PPyEtCN) into nanowire and microtube morphologies was investigated and is reported here. Cyclic and pulsed electrochemical techniques were employed to electrodeposit copper micro and nano particles at PPyEtCN and polypyrrole (PPy) surfaces. A PPy nanowire/copper-modified electrode was investigated for its effectiveness as an electrochemical sensor for the detection of the nitrate ion. PPy nanowire films were successfully electrochemically synthesised and modified with copper, with good reproducibility. These nanocomposites were then tested for use in the detection of nitrate through electroreduction of the ion. It was found that the sensitivity of the nanocomposite was not as low as required, however, its stability allowed for slower degradation of the nitrate reduction signal, suggesting that these electrodes may be suitable for long-term sensing systems, where longevity rather than sensitivity is required.
The Water Framework Directive clearly outlined a requirement that the levels of Cr(VI) and Cu(II) in Irish water be monitored. Electrochemical sensors were designed and investigated for their potential use in the detection of metal ions in aqueous solutions. Chromium commonly exists in either its hexavalent (Cr(VI)) or trivalent (Cr(III)) form. Chromium (VI) is a highly toxic metal ion that is well known for its contribution to a variety of health problems, such as cancers and chronic dermatitis. It is widely used in industries, such as tanning, stainless steel production and metal finishing, and may be leached into groundwater. Chromium can readily be transported in soil, and leached into water bodies far from the original sites of contamination, so its removal from industrial waste to within the regulatory limits is vital. Copper is generally found in its divalent or monovalent form. Ingested in relatively high concentrations, it can induce symptoms of severe food poisoning; long-term exposure can result in damage to the liver and kidneys, and is also linked to Alzheimer’s disease. It is toxic to fish and aquatic life with high levels of bioaccumulation. Copper is often used in electrical and plumbing systems and is known to corrode under certain circumstances, resulting in leaching into soils and water sources. Copper is also a waste product of a number of industries, such as electroplating. The European Communities (Drinking Water) (No. 2) Regulations 2007 set out a mandatory limit in drinking water of 50 μg L-1 chromium and 2 mg L-1 copper.