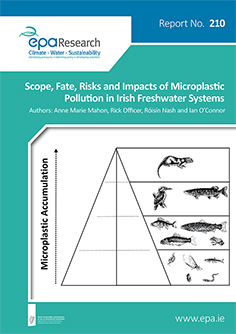 Principle microplastics pressures were identified as industry, landfill, urban waste water treatment plants (UWWTPs), domestic waste water treatment plants and sewage sludge/biosolids derived from UWWTPs. Manufacturing industries involved in the primary production of polymers, as well as those involved in machining of plastics, were found to emit microplastics to sewer and have high potential as a diffuse source to surface waters via surface run-off. UWWTPs were identified as receptors of the cumulative abundance of microplastics arising from industry, landfill and household waste. Partitioning of microplastics results in the majority of microplastics being incorporated into the sewage sludge, which is mostly land spread in Ireland.