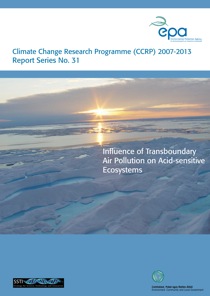 This report provides an overview on the current status of transboundary air pollution in Ireland, primarily with respect to the influence of emissions of sulphur dioxide (SO2) and nitrogen oxides (NO×) on previously surveyed acid-sensitive lakes, and the levels of trace metals, including mercury (Hg), and persistent organic pollutants (POPs) in relatively unimpacted1 upland catchments. The report presents results from the EPA-funded research project 2007-CCRP-4.4.4b, ‘Assessing the Influence of Transboundary Air Pollution on Acidsensitive Lakes and Soils’.

Upland catchments provide a range of ecosystem services that are vital to human health – such as water supply and purification, climate regulation, and biological and genetic diversity. In addition, they have commercial importance for their recreational services,
especially tourism. This is embodied in their designation as ‘Annex 1’2 habitats (under the Habitats Directive), their association with National Parks and a recognition that they represent areas of outstanding natural beauty.

Transboundary air pollution and its potential impacts on human health and the environment have been a major concern since the late 1960s. National and international policies have been implemented to reduce atmospheric emissions of anthropogenic
compounds with the objectives of improving air quality, reducing acidic deposition and ultimately protecting the health of ecosystems. The principal objective of this research project was to assess the influence of major transboundary air pollutants on acid-sensitive lakes and soils in Ireland. Extensive physicochemical surveys of acid-sensitive lakes (previously surveyed
during 1997) and soils in primarily upland regions were carried out during 2007–2008, with repeat sampling at a small network of upland lake catchments. The surveys provided an assessment of the chemical status of acid-sensitive ecosystems in relation to transboundary air pollution. Moreover, the research focused on filling knowledge gaps specifically in relation to the physicochemical characteristics of acid-sensitive soils, and the levels of greenhouse gases, trace metals, Hg and POPs in upland acid-sensitive lake catchments.