Research 390: Nitrogen–Sulfur Critical Loads: Assessment of the Impacts of Air Pollution on Habitats

Summary: Air pollution can have unacceptable impacts on the natural environment. In particular, elevated atmospheric nitrogen deposition can result in changes to the plant communities of natural and seminatural ecosystems, resulting in decreases in plant biodiversity. This project developed empirical critical loads of nutrient nitrogen for 17 Annex I habitats. The project analysis suggests that habitats within the Atlantic biogeographic region have critical loads at the low end or lower than existing UNECE recommended ranges for European habitats. 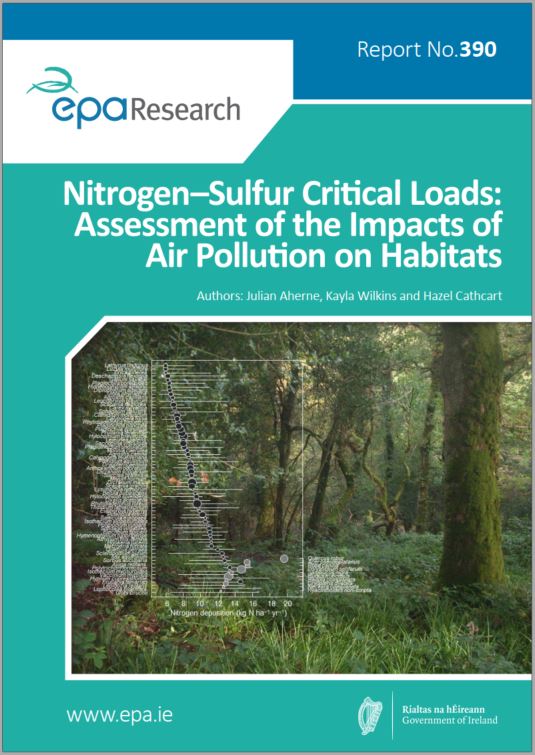 The Convention on Long-range Transboundary Air Pollution (the Air Convention) under the United Nations Economic Commission for Europe (UNECE) was the first international legally binding instrument to deal with the problems of air pollution on a broad regional scale. The Air Convention established six International Cooperative Programmes (ICPs) on Forests, Waters, Materials, Vegetation, Integrated Monitoring, and Modelling and Mapping to identify the most endangered areas, ecosystems and other receptors by considering the damage that has been caused to terrestrial and aquatic ecosystems and materials.

Air pollution can have unacceptable impacts on the natural environment; pollutants, such as sulfur and nitrogen oxides, can travel several hundreds or even thousands of kilometres before damage, for example acidification and eutrophication, occurs. Initial efforts to reduce the extent of environmental damage led to national and international legislation aimed at controlling emissions of long-range transboundary air pollution. The work of the Air Convention has underpinned scientific research on the impacts of air pollution during the last three decades. Emphasis on a cost-effective abatement strategy, based on scientific criteria, led to the development of the critical loads concept. In simple terms, this concept indicates how much pollutant deposition an ecosystem can tolerate without unacceptable long-term damage.

Critical loads are widely used as a tool for assessing the sensitivity of terrestrial and aquatic habitats. Exceedance, whereby atmospheric pollutant deposition is greater than the habitat critical load, is used as an indicator of unacceptable effects. The critical loads approach underpins emissions reduction policies under the UNECE’s Air Convention. In addition, critical loads are widely used by European Union (EU) Member States to assess the impacts of national policies on the level of exceedance, evaluate the permitting and licensing of emissions from industrial and agricultural facilities, and support Appropriate Assessments under Article 6.3 of the Habitats Directive (92/43/EEC).

We developed empirical critical loads of nutrient nitrogen specific to Annex I habitats. Our analysis suggests that plant species in blanket bogs and heathlands are the most sensitive to total nitrogen deposition; we recommend an empirical critical load of 5 kg N ha−1 y−1. In addition, we modelled the deposition velocities for gaseous and particulate nitrogen species to provide a comprehensive assessment of observation-based total nitrogen deposition. We observed a statistically significant increase in the dry deposition of gaseous and particulate nitrogen at Valentia Observatory during 2006–2015. National critical load data have made an important contribution to the abatement of long-range transboundary air pollution; however, critical loads have been virtually ignored under national policy assessments. It is recommended that national participation in the well-established network of ICPs should be formalised and strengthened. The long-standing network provides an obvious framework for national monitoring activities, such as the required ecosystem monitoring under the EU National Emissions Ceiling Directive.