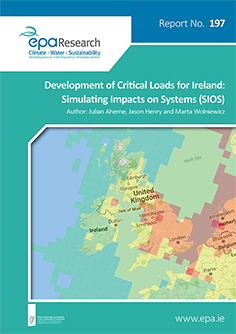 Air pollution can have unacceptable impacts on the natural environment; pollutants, such as sulphur and nitrogen oxides, can travel several hundred or even thousands of kilometers before damage, for example acidification and eutrophication, occurs. Initial efforts to reduce the extent of environmental damage led to national and international legislation aimed at controlling emissions of long-range transboundary air pollution. Emphasis on a cost-effective abatement strategy, based on scientific criteria, led to the development of the critical loads concept. In simple terms, this concept indicates how much pollutant deposition an ecosystem can tolerate without unacceptable long-term damage.

Critical loads are widely used as a tool for assessing the sensitivity of terrestrial and aquatic habitats; exceedance, whereby atmospheric pollutant deposition is greater than the habitat critical load, is used as an indicator of unacceptable effects. The critical loads approach is used under the United Nations Economic Commission for Europe Convention on Long-range Transboundary Air Pollution and the European Union National Emission Ceilings Directive (2001/81/EC) to quantify the impacts of acidifying and eutrophying air pollutant deposition on natural ecosystems, and to guide policy on reducing the environmental impacts of transboundary air pollutants.

The report describes the determination of critical loads of acidity and eutrophication for terrestrial and aquatic ecosystems in Ireland. In addition, the project evaluated the potential impacts of nitrogen deposition on plant species diversity. National critical load data have made an important contribution to the abatement of long-range transboundary air pollution; however, critical loads have been virtually ignored under national policy assessments. As such, it is recommended that there should be a wider adoption of critical loads in national and international policy assessments (e.g. Article 6.3 of the Habitats Directive), and development of national synergies between the Habitats and Clean Air Directives, given that nitrogen deposition is a threat to biodiversity.