Summary: Globally, climate change will have wide-ranging effects on all aspects of society, the environment and the economy. This is particularly the case for urban areas, which represent only a small fraction of the Earth’s surface (less than 3%) but are where more than half of the global population resides and concentrations of assets and economic activities are found. 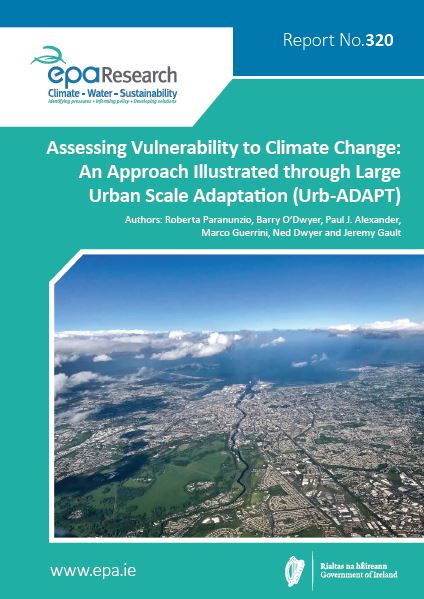 Ireland’s climate is changing in line with global trends and this trend is expected to continue and intensify into the future. Climate change will have wide-ranging effects on all aspects of Ireland’s society, environment and economy, and this is particularly the case for Ireland’s urban areas. This is because all of Ireland’s major cities are located on the coast and are already at risk from sea level rise and extreme weather events. Although urban areas generally experience the same exposure to climate change as the surrounding regions, these areas are considered to be at particular risk (e.g. flooding, droughts and excess heat) because of processes of urbanisation. With urbanisation set to continue and intensify in terms of both density and extent, planned adaptation of these areas is now a priority.

As a national policy objective, Ireland’s National Planning Framework (Project Ireland 2040) aims to consolidate growth in Ireland’s existing five cities and regional centres, thereby increasing the density of the existing urban footprint. Moreover, and reflecting the requirement of Ireland’s National Adaptation Framework and Climate Action Plan, Project Ireland 2040 requires the consideration of climate change impacts in settlement strategies. For the Eastern and Midlands Region, which encompasses Dublin, its wider commuting catchment and its surrounding and nearby counties and towns, the Urb-ADAPT project combines climatic and socio-economic information to assess the vulnerability of the region to key urban climate impacts. Accounting for potential future urban development patterns, project outputs provide an assessment of the vulnerability of the region to projected increases in urban heat, pluvial flooding and coastal inundation. Such information supports decision-making in relation to appropriate mitigation and adaptation actions for existing built areas and planning for future development of the region through the National Development Plan by highlighting potential future impacts and vulnerability. In addition, the approach developed through Urb-ADAPT can be replicated on both a national and an international basis.