Summary: The continued rise in transport activity, energy consumption and emissions can be attributed to economic, technological and societal factors. A range of technoeconomic and socioeconomic analytical tools and models were developed and employed in this project to generate an evidence base that can inform decarbonisation-focused transport sector decision-taking and policymaking. 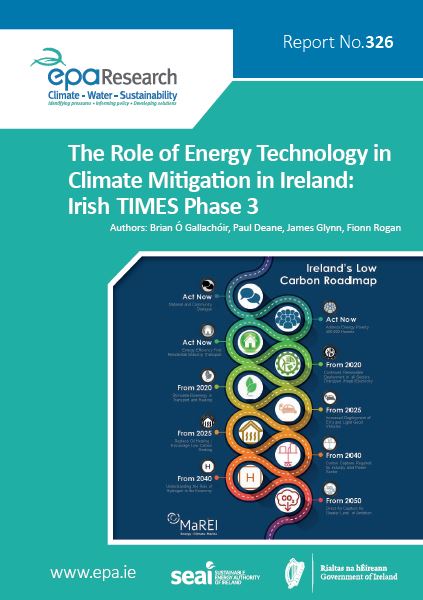 The use of fossil fuels for energy, poor land management and agriculture practices are driving the unequivocal warming of our climate system. The Paris Agreement, reached in 2015, was very significant in terms of the global politically agreed ambition regarding climate action (i.e. pursuing efforts to limit the temperature increase to well below 2°C and making efforts to limit warming to 1.5°C above pre-industrial levels). The remaining carbon budget to stay below 1.5°C by 2100 with a greater than 50% probability is estimated at 200 GtCO2–700 GtCO2. The cumulative carbon budgets for Ireland utilised in this analysis range from 766 MtCO2 to 128 MtCO2 from 2015 to the end of the time horizon (2070). They are derived from the Irish population share of 0.064% of the global population and the same 0.064% share of the remaining global carbon budgets. These carbon budgets relate to a 66% probability of achieving a 2°C limit, to a 50% probability of reaching a 1.5°C limit, and are chosen to span the technically feasible range of mitigation options for Ireland.

This project enabled the MaREI Centre for Energy, Climate and Marine to evaluate the role of energy technology in climate mitigation in Ireland. A key development in Irish TIMES, Ireland’s only fully integrated long-term energy systems optimisation model, was the capacity to provide net zero emissions scenarios for Ireland that are considered to be consistent with the Paris Agreement temperature goals. MaREI used the models developed in this project to inform national engagement on EU greenhouse gas (GHG) emissions target setting in 2014. It also informed the 2015 White Paper on Energy, Ireland’s first National Mitigation Plan in 2017 and the government’s Climate Action Plan in 2019. Regarding the Climate Action Plan, this analysis focused on increasing Ireland’s long term ambition to 2050 beyond the 80% reduction target for CO2 and on how this aligns with Ireland’s target under European Union legislation for GHG emissions reduction by 2030.

This report focuses on the role of clean technologies in all sectors of the Irish economy and highlights that no silver bullets exist. Many technologies are required across all sectors. Energy efficiency is a resilient technology choice and is an enabler of low carbon choices. Continued deployment of renewables in all modes of energy (electricity, heat and transport) is required, in particular the continued deployment of bioenergy in the heating and transport sectors. The roles of energy efficiency, the growth of electrification and the increase in renewable electricity are reflected in the political and media discourse on climate action in Ireland. However, the potential contribution from bioenergy and negative emissions technologies reflected in this analysis are still largely ignored. The roles and costs of hydrogen and new synthetic fuels in the future Irish energy systems require greater understanding.