Research 404: PhenoClimate: Impact of Climate Change on Phenology in Ireland

Summary: The PhenoClimate project determined the impact of climate change on seasonal life cycle (phenological) events and the consequences for species interactions. For Irish woodlands, an advance of the growing season in spring was identified using satellite remote sensing. Arrival of migratory birds was found to advance too, however, instances in which migratory birds showed asynchrony with insect first flight dates were identified, suggesting that climate change can result in phenological mismatch. 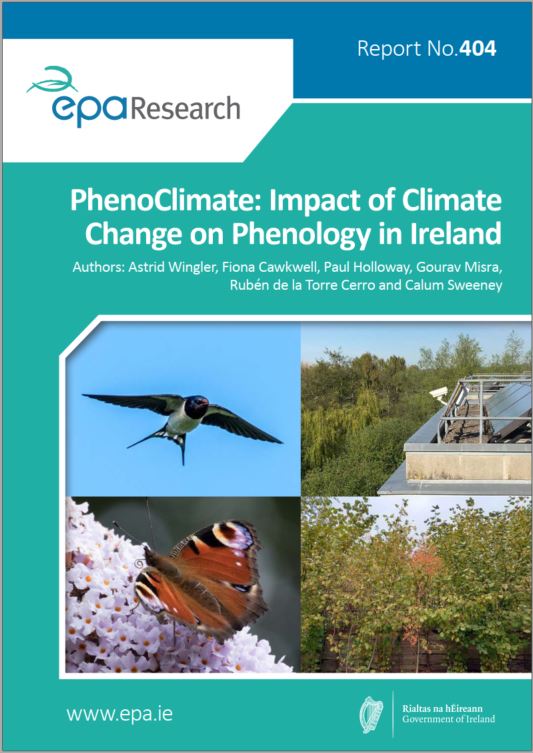 Changes in the timing of phenological (i.e. seasonal biological) events, as identified in the PhenoClimate project, are key indicators of the impact of climate change on organisms in nature, forestry and agriculture. Phenology also directly affects the productivity of natural and managed ecosystems, the capacity of vegetation to capture carbon and the intricate biological interactions underlying biodiversity.

This project has shown that the ability of trees to respond to climate change varies across Ireland, with consequences for future growing season length, carbon sequestration and survival of extreme weather events. A better understanding of tree phenology is therefore urgently required for the success of tree planting in forestry, agroforestry and urban environments.

The PhenoClimate project developed methods for monitoring climate change impacts on biodiversity. The findings of this project revealed examples of synchrony and asynchrony in the phenology of organisms at different trophic levels (vegetation, insects, birds) in response to climate. These can threaten Irish biodiversity through a lack of available food sources for some species, while other species may become dominant and disrupt the balance of ecosystems.

In 2019, Ireland declared a climate and biodiversity emergency. A review of the National Biodiversity Action Plan (2017–2020) by the National Biodiversity Forum in 2021 made vital recommendations to halt Ireland’s biodiversity loss and improve accountability of the next National Biodiversity Action Plan. Prediction of future impacts of climate change on biodiversity requires phenological research. Findings from phenological research are also key for climate mitigation and adaptation, for example by selecting the most suitable trees for a future climate. This is recognised in the Agriculture, Forest and Seafood Climate Change Sectoral Adaptation Plan (2019), which stresses the threat of maladaptation to a future climate, resulting in not just biodiversity losses and reduced capacity to sequester carbon, but also lower productivity of forests. As outlined in the Ag Climatise roadmap, forestry and agroforestry play a key role in the carbon dioxide abatement potential of land management; this is also highlighted in the draft Agri-Food Strategy 2030. To deliver on the potential to increase future carbon sequestration, impacts of climate change on phenological events that determine growing season length, as investigated by the PhenoClimate project, need to be taken into account.

The PhenoClimate project draws conclusions on the past impact of climate change on phenological indicators such as the start and end of the growing season of trees, the emergence of butterflies and moths, and bird migration. The project also makes recommendations for future phenological monitoring in Ireland. In conjunction with high-resolution satellite remote sensing (e.g. Sentinel-2), phenological cameras (phenocams) are an effective means of accurately monitoring seasonal changes in canopies and individual trees. A wider deployment of phenocams is therefore recommended for forest and urban settings to monitor climate responses. This project also applied new methods using citizen science and remote sensing data for the analysis of climate change impacts on phenology. These methods enable the investigation of species interactions across trophic levels and the prediction of threats to these interactions. To ensure that the management of existing data (from phenological gardens and citizen science) is coordinated at the national level, and future monitoring schemes (e.g. using phenocams) are integrated in phenology monitoring projects, this report recommends the re-establishment of a national Irish phenology network.