Summary: The prevalence and persistence of Cryptosporidium – particularly with respect to drinking water supplies – is one of the key environment and health issues for the Environmental Protection Agency (EPA). 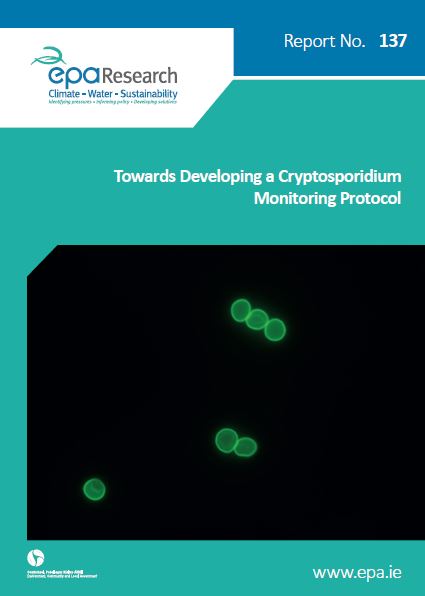 The enteric protozoan parasite, Cryptosporidium, is an important cause of diarrhoeal disease worldwide. Cryptosporidium oocysts are hardy and can persist for longer than Escherichia coli; they cause infection at low levels (probably <10 oocysts). Of the 26 species and over 40 genotypes described to date, at least eight can infect humans, but only three are considered major human pathogens: Cryptosporidium hominis, C. parvum and C. meleagridis. While C. hominis is largely restricted to humans, C. parvum has been reported from a large range of mammals and is very prevalent in young ruminants. The third species, C. meleagridis, is primarily an avian parasite that occasionally infects humans. Conventional disinfectants, such as free chlorine, chlorine dioxide or chloramine at the concentrations normally used to treat drinking water, do not effectively inactivate Cryptosporidium oocysts. The most effective means to inactivate oocysts during drinking water treatment is exposure to ozone or ultraviolet irradiation. In January 2004, cryptosporidiosis became a notifiable disease in Ireland. Since then between approximately 370 and 610 cases (with an average of 472) have been reported each year. These figures correspond to a crude incidence rate of between 8.7 and 14.4 cases per 100,000 of population annually, one of the highest rates in Europe.

The prevalence and persistence of Cryptosporidium – particularly with respect to drinking water supplies – is one of the key environment and health issues for the Environmental Protection Agency (EPA). This project was established through the EPA’s Environmental Research Centre in conjunction with the Department of Agriculture Food and the Marine’s laboratory complex at Backweston, Co. Kildare, to initiate the development of a national Cryptosporidium monitoring protocol.