Summary: Brominated flame retardants (BFRs) and perfluoroalkyl substances (PFASs) have been used extensively in applications such as electrical goods, soft furnishings and building insulation foam. The ELEVATE project generated data to facilitate the assessment of human exposure to these chemicals. 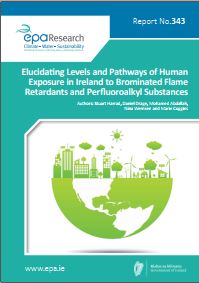 Brominated flame retardants (BFRs) and perfluoroalkyl substances (PFASs) have been used extensively in applications such as electrical goods, soft furnishings and building insulation foam. Given concerns about their environmental persistence, ability to bioaccumulate and adverse health effects, some BFRs and PFASs are listed under the Stockholm Convention on Persistent Organic Pollutants (POPs), an international treaty designed to eliminate POPs and to which Ireland is a party. Previous studies revealed low levels of BFRs and PFASs in Irish foodstuffs and human milk; however, no data existed for Ireland on concentrations of BFRs and PFASs in indoor air and dust, and of PFASs in drinking water. This project generated these data to facilitate the assessment of human exposure to these chemicals, allowing comparison with guidelines on human exposure developed by the European Food Safety Authority (EFSA), the revised European Union Drinking Water Directive, and limits on concentrations of PFASs in drinking water. The project also measured BFRs and PFASs in Irish human milk to facilitate assessment of the success of actions designed to reduce human exposure since the last measurements in 2011.

The declines in concentrations of some BFRs in human milk from Irish mothers since the previous equivalent study in 2011 suggest that past policies aimed at reducing the exposure of the Irish population to these BFRs have been successful. Such biomonitoring also reveals that measures taken to restrict the use of decabromodiphenyl ether have not yet reduced exposure in Ireland and also suggests increased exposure to DBDPE, a likely replacement for decabromodiphenyl ether. To facilitate ongoing evaluation of the impact of measures taken to reduce human exposure to such chemicals, biomonitoring of BFRs and PFASs in the Irish population is recommended every 5 years.
In addition to continued monitoring of human milk, which in this study has proven an effective biomonitoring tool, measurements should also be made in blood and urine. This will permit assessment of levels of BFRs and PFASs across a wider range of the population and facilitate monitoring of human exposure to less persistent contaminants through their urinary metabolites.