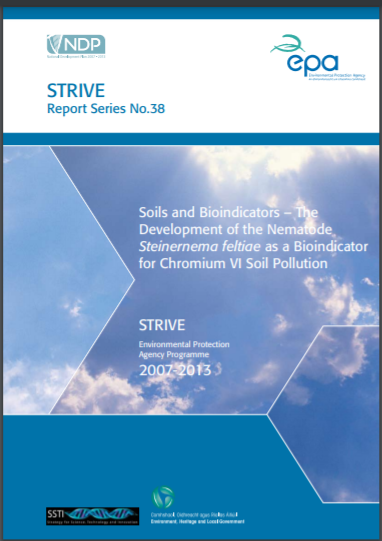 This study set out to determine the suitability of the nematode Steinernema feltiae as a bioindicator for heavy metal pollution, specifically chromium VI. Hexavalent chromium (chromium VI) has been extensively shown to induce general environmental toxicity, as well as more specific effects of an acute and chronic nature, such as neurotoxicity, dermatoxicity, genotoxicity, carcinogeneticity, and immunotoxicity.

Nematodes have been studied as bioindicators for environmental stress for many years, and although great strides have been made in understanding the effects of contaminants on nematode communities and species, only one nematode to date has been officially described as a test organism. This nematode is Caenorhabditis elegans. There are strong ecological, biological and even practical arguments for the use of nematodes in assessing environmental disruptions, and the view is that the effects of pollution must be understood for as many species and genera as possible in order to inform environmental policy at effective levels.

Steinernema feltiae is ubiquitous in Ireland and can be easily isolated and identified. Its life cycle is completed in both external environmental habitats, such as soils, and within host cadavers. These characteristics present it as a viable alternative to other nematode test genera, in that it can be exposed to contaminants in a wider range of environmental habitats than exclusively soil-dwelling species such as C. elegans.