Summary: The Towards Land Cover Accounting and Monitoring (TaLAM) project is part of Ireland’s response to creating a national land cover mapping programme. Its aims are to demonstrate how the new digital map of Ireland, Prime2, from Ordnance Survey Ireland (OSI), can be combined with satellite imagery to produce land cover maps. 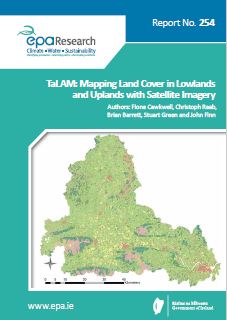 Agriculture, forestry, land use change and other land uses account for about 24% of global greenhouse gas emissions. Ireland therefore requires maps of land cover and land use to aid assessment and reporting activities, including calculations of the annual greenhouse gas budget, as well as identify issues such as habitat loss, improve environmental management and support policy implementation. Field surveys allow mapping of habitats to individual species and assemblages, which is invaluable for small areas but unfeasible at a national level. As of 2016, the most detailed national land cover dataset for Ireland is the European Coordination of Information on the Environment (CORINE) map. However, despite being widely used, this has limitations because of its spatial scale, the types of land cover classified and the update cycle. With other European countries adopting best practice national mapping techniques that combine satellite imagery and spatial geoinformation to populate vector objects, this project aims to determine whether similar approaches can be adopted in Ireland.

European and national policies on environmental management, the protection of nature and biodiversity, and climate change adaptation are closely linked to current and future land use practices. The outcomes of this project highlight the ability to label polygons within the Ordnance Survey Ireland Prime2 vector database with land cover derived from medium resolution satellite imagery and also to create land cover polygons where no pre-existing delineation information is available. Following the Paris Agreement, specific guidelines on recording the nature and status of sources, sinks and reservoirs of carbon are being developed, and satellite-derived land cover maps will be essential for objective, repeatable mapping to identify the contribution of land cover and its change to Ireland’s annual greenhouse gas budget.

Medium resolution (5–50 m) satellite imagery is suitable for populating Ordnance Survey Ireland Prime2 polygons to map land cover within Ireland., Alternatively, satellite imagery can be used to derive such polygons where they do not already exist. This approach will support European and national scale reporting and legislation requirements. With the planned launch of future optical and microwave satellite sensors, this approach will continue providing land cover mapping information for many years to come.