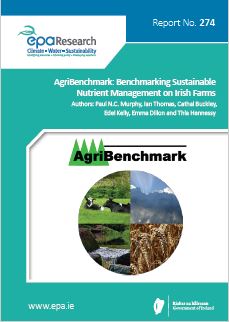 Large ranges in key performance indicators (KPIs) between farms show that there is significant scope to reduce nutrient source pressures and increase use efficiencies through benchmarking to measure and motivate improved management practices. Dairy farms exert the greatest nutrient source pressure (mean 156 kg N ha–1 and 7 kg P ha–1), equivalent to 43% of the total agricultural N (nitrogen) surplus and 31% of the total agricultural P (phosphorus) surplus, from only 21% of the agricultural land. With the end of the milk quota system and the planned expansion in milk production under the Food Harvest and Food Wise programmes, the need to encourage improved nutrient management on dairy farms should be emphasised. The AgriBenchmark study explored possibilities for benchmarking nutrient management on Irish farms, using National Farm Survey data (2008–2015) to derive three KPIs: nutrient balance (kg ha–1), nutrient use efficiency (NUE; %) and profitability (gross margin; € ha–1). A positive nutrient balance (surplus) represents a nutrient source pressure, in terms of risk of nutrient loss to the environment, with potential impacts on water quality, greenhouse gas (GHG) emissions, air quality and biodiversity. Trends of reduced N and P surpluses and increased efficiencies for most farm types in the last 3 years of this study indicate improved sustainability and reduced nutrient source pressures.

Benchmark farms minimise surpluses to relatively low levels for a given level of production intensity, with lower fertiliser and feed imports per ha, greater exports of agricultural products per ha, relatively high stocking rates and higher gross margins. For example, the optimal benchmark for dairy farms is characterised by farms with relatively high stocking rates (2.2 livestock units ha–1) but relatively low N and P surpluses (122 kg N ha–1 and 4.5 kg P ha–1), relatively high NUEs (31% N-NUE and 72% P-NUE) and high gross margins (€2734 ha–1). To achieve these improvements, it is necessary to focus both on optimisation of nutrient imports and their management and on optimisation of nutrient exports, which, in the case of dairy farms, is milk. For the ambitious scenario of all non-benchmark farms reaching the optimal benchmark, moderate reductions in nutrient surpluses were found with great improvements in profitability and resource use efficiency. The findings from this research may inform policy in areas such as programmes to achieve targets under the EU Nitrates and Water Framework Directives, the National Emissions Ceilings Directive (ammonia emissions), the EU 2020 and 2030 GHG commitments and the 2050 Low Carbon Economy Roadmap, as well as economic policies relevant to the agri-food sector and rural economies, such as the Food Harvest and Food Wise programmes.

The findings from this research illustrate that significant reductions in nutrient source pressure may be possible while also improving efficiency and profitability – a win-win scenario. For the most ambitious benchmarking scenario for dairy farms, the gross margin improved by €919 ha–1, associated with a decrease in N surplus of –35 kg N ha–1 and an increase in NUE of 11.2 percentage points, as a result of reduced fertiliser and feed N imports (–22 and –29 kg N ha–1, respectively) and increased milk N exports (+13 kg N ha–1). Nationally, this scenario led to a 31% decrease in estimated agricultural surplus N, with the largest proportions of this decrease coming from dairy (30%) and non-suckler cattle (29%) farms. Effective knowledge transfer to farmers would be critical to achieving the potential improvements highlighted in this study. Central to this would be a web-based management decision support benchmarking tool, highlighting the KPIs for individual farms, ranking farms against the benchmark, summarising the potential gains that could be made by improving management and suggesting management practices that could help to move farms in the right direction.