Research 251: The Impact of On-site Domestic Wastewater Effluent on Rivers and Wells

Summary: This research project evaluated the impact of domestic wastewater treatment system (DWWTS) effluent as a health hazard to consumers of groundwater from private wells and also a source of nutrient water pollution to surface water in small catchments. 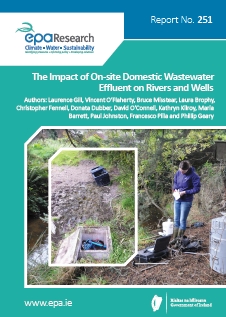 The domestic wastewater of approximately one-third of the population in Ireland (~490,000 dwellings) is treated on site by domestic wastewater treatment systems (DWWTS), of which approximately 90% are septic tanks. This research project has evaluated the impact of DWWTS effluent (i.e. the liquid waste or sewage that is discharged into the sea or a river) as a health hazard to consumers of groundwater from private wells and also a source of nutrient water pollution to surface water in small catchments. This has been achieved by (1) surveying and sampling 212 wells in four areas, comprising two areas of Extreme and two areas of Low groundwater vulnerability and (2) sampling river water quality upstream and downstream of clusters of DWWTS on small streams in four catchments underlain by low-permeability subsoils.

The research on private wells has found that 15% of wells were contaminated by E. coli in a one-off sampling round. Site assessments also revealed that just 35% of wells assessed were adequately finished and protected against contamination. The research on the four small river catchments, all of which were situated in low-permeability subsoils and had a high density of septic tanks (from 16 to 33 per km2), revealed rapid hydrological responses to rainfall events indicative of shallow hydraulic pathways. Water quality and flow monitoring over the course of a year revealed varying contributions of phosphorus attributable to DWWTS in the catchments, from 1.3 to 13.8%.

The results obtained from these trials have been used to inform the Source Load Apportionment Modelling carried out by the Catchments Unit within the Environmental Protection Agency. This model is being used to help characterise sources of aquatic pollution in catchments, from which programmes of measures are being developed in accordance with Ireland’s commitments under the Water Framework Directive.

In addition, the 212 site assessments carried out on private wells have shown that the design, construction and condition, and therefore overall standard, of wells in Ireland (and hence their susceptibility to contamination) is highly variable. This highlights the fact that tighter regulation for private well construction needs to be introduced, including post-construction sign-off by a regulatory body. This research strengthens recommendations from previous research projects that alternative treatment systems/approaches are required in low-permeability areas to prevent contamination of surface waters.

The research also focused on the use of specific chemical, biochemical and microbiological compounds as tracers of DWWTS effluent contamination in both private wells and rivers, leading to the development of appropriate strategies for fingerprinting sampling of both surface water and wells. Fingerprinting methods evaluated include ionic ratios (potassium/sodium and chloride/bromide), fluorescent whitening compounds, faecal sterol profiles, artificial sweeteners, caffeine, pharmaceuticals (carbamazepine and sulfamethoxazole) and human-specific Bacteroidales 16S rRNA genetic markers.

The performance of each fingerprinting technique as well as the resources (and hence costs) required for their application varied considerably. Three methods/compounds showed promise in identifying and tracing sources of well contamination. For surface water studies, a recommended tiered approach is proposed based on short-term, low-flow monitoring, starting with the more common analytical techniques for E. coli and ammonia, but then moving to more confirmatory tests for fluorescent whitening compounds, followed by faecal sterols and then artificial sweeteners, caffeine and pharmaceuticals if needed.