Summary: The Sea-MAT project aimed to understand the role of local environmental conditions in the development of green tides in Ireland. 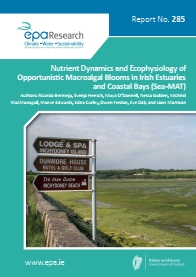 Eutrophication is still a challenge for Europe and, in 2017, 100,000 km2 of coastal ecosystems remained affected. This equates to an area almost one and a half times the size of Ireland. In Ireland, 16% of transitional and coastal waters are classified as potentially eutrophic. The Sea-MAT project monitored four estuarine locations affected by macroalgal blooms (green tides). Macroalgal coverage and biomass abundances were considerably higher than the threshold values according to the monitoring tool used for the European Union Water Framework Directive (WFD, 2000/60/EC). Green tides comprise laminar and tubular Ulva spp., with tubular morphologies more numerous and less susceptible to transportation out of the estuary. Tubular morphologies appear to be buried at the end of the bloom, favouring accumulation of organic matter and nutrients in sediments. These can be a potential source of nutrients for subsequent blooms, perpetuating the eutrophication problem. The arrival of the non-native species Gracilaria vermiculophylla is an additional pressure as this species is able to bloom in areas where native species cannot

In Ireland, the ecological status of transitional waters is assessed via the European Union WFD, based on physicochemical and biological parameters, which stipulates that good status must be achieved in order to protect associated ecosystems. The findings of the Sea-MAT project have implications for WFD assessment and provide information on future blooms in the context of climate change, as proposed by the Intergovernmental Panel on Climate Change for Irish coastal waters, forecasting earlier blooms with greater biomasses. These blooms are of great concern to the Local Authority Waters Programme (LAWPRO), which focuses on the protection and improvement of
water quality, including estuarine and coastal waters, by engaging public bodies, stakeholders and local communities, and also to An Fóram Uisce, a statutory body established to represent all stakeholders interested in water quality.

The Sea-MAT project has provided an understanding of the role of local environmental conditions in the development of macroalgal blooms in Ireland. Recommendations to reduce the impact of seaweed tides and control their development are proposed. Molecular tools successfully revealed the multispecific composition of Irish green tides and confirmed the presence of the alien species G. vermiculophylla along Irish coasts. The determination of the nitrogen content of the seaweeds forming blooms in Ireland revealed that nitrogen levels were above that needed to sustain the blooms and that other controlling factors limited growth throughout year. Remote sensing techniques are an effective and accurate method for monitoring the spatial extent of bloom events in Irish estuaries.