Summary: Loss of pollutants from grassland systems to water bodies is a significant threat to water quality and represents one of the main environmental problems facing agri-ecosystems in Ireland. This project evaluated existing literature and generated temporal and spatial data on the environmental impact of cattle exclusion measures. 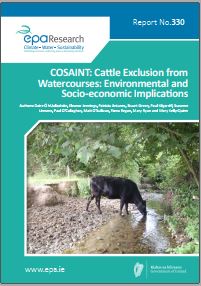 The COSAINT project highlights that cattle access to watercourses can significantly impact on a number of environmental variables associated with water quality. The negative impact of cattle access to watercourses on sedimentation and bacterial parameters was particularly strong, whereas the impact on nutrient and ecological parameters was more variable and site specific. Increased sediment deposition is increasingly being identified as a key stressor in watercourses. Cattle access points resulted in significant increases in the deposition of fine bed sediment and the infiltration of sediment into stream bed habitats. Increased stream sediment acted as a reservoir for faecal bacteria and phosphorus, which persisted when cattle were removed periodically from the field, but did not persist after cattle access pressures were fully removed. Increased sediment deposition was also a dominant driver of macroinvertebrate community change, although the results here were more variable and site specific. Significant reductions in sediment-sensitive taxa were encountered downstream of cattle access points at several study sites, whereas abundances of sediment-tolerant groups increased. Near real-time monitoring also showed increases in turbidity and suspended sediment and Escherichia coli when cattle were in the stream.

Fenced riparian buffer measures have been included in most European agri-environment schemes and are among the most common mitigation measures to prevent cattle access to watercourse. However, fencing and cattle exclusion alone may not be sufficient to restore the ecological condition of impacted watercourses. Future policy should consider multiple mitigation measures that interact with one another. For example, fencing to exclude cattle could be coupled with the provision of alternative water supplies and targeted riparian buffer management to yield multiple environmental benefits (including biodiversity and carbon sequestration), thereby achieving maximum environmental improvements. Such an approach could be facilitated under revisions of the Common Agricultural Policy, whereby the quantity of a mitigation measure could be incentivised under Pillar 1 payments, but the performance (linked with targeting and management) of associated measures could be incentivised under Pillar 2 payments (i.e. results-based approaches).

The COSAINT project indicates that fencing/exclusion of cattle from watercourses can help improve the quality of environmental indicators over the short and long term. It is therefore important to provide greater knowledge to farmers on the environmental impact of cattle exclusion, coupled with information on appropriate, cost-effective approaches to prevent livestock access to watercourses. Providing greater knowledge to farmers improves confidence in their own ability to undertake water protection measures, such as fencing off watercourses. Encouraging or incentivising farmers to join group learning environments can also improve the effectiveness of mitigation measures.

Future projects and schemes could also develop multiple targeted novel mitigation measures. This could take the form of treatment scenarios. The geographic information system (GIS) framework developed in the COSAINT project could be coupled with available datasets on water quality, hydrology and stocking density and these combined datasets could be used to model the likely response to different treatments (in isolation or integrated), based on the best available spatial data.